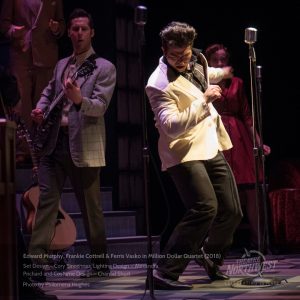 Theatre NorthWest is a regional theatre dedicated to bringing our audience a wide range of plays drawn from the contemporary Canadian and International repertoire. Actors and other theatre professionals are contracted for each production from across Canada to work with our resident staff in order to bring together a four-play season which runs from September to May.
Theatre NorthWest is the largest arts organization in the northern two-thirds of British Columbia, Theatre NorthWest boasts the most paid attendance, most annual performances, and one of the highest subscription rates in Canada.

To maintain and operate a professional theatre company in Prince George, BC thereby providing for the citizens of North Central British Columbia:

• Theatre of high calibre, reaching a broad cross-section of the community through varied and stimulating programming that strives to inspire, invigorate, educate, and entertain by reflecting and illuminating the concerns and aspirations of both the community and our world today.

• Promotion of interest in – and development of – theatre arts for North Central B.C. and Canadian theatre by such means as: the presentation of plays and other performances, audience education, instruction in and demonstration of the arts of the theatre.

• AND ABOVE ALL: ACCESS for those in this Northern region to the pleasures and benefits of professional theatre commonly enjoyed by Canadians in our country’s traditional centers.

Theatre NorthWest is an active member of The Professional Association of Canadian Theatres (PACT), engages artists under both the Canadian Actors Equity Association (CAEA) CTA Agreement and the Associated Designers of Canada (ADC) and receives generous funding from The Canada Council for the Arts, The B.C Arts Council, and the City of Prince George